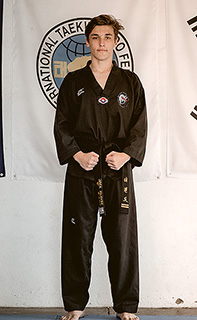 Biography
I started training in ITF Taekwondo when I was 4 years old in England as my Dad wanted me to learn to defend myself from a young age. My younger brother Josh (currently 1st Dan Black belt at IMT) and I used to love WWE and would play fight at home – making TKD and self-defence a daily part of our lives.

In England I regularly took part tournaments and won gold at sparring – sparking a passion for semi and full contact fighting.

In 2011, (when I was 11) we moved from England to Sydney and after looking at a number of different TKD clubs, it was obvious that Master Simon’s Gordon club was the best style and quality of TKD club in the North Shore. I was one of the youngest to join the adults class but it really pushed me to train and spar with people bigger that me – and something that I think built real confidence in my TKD.

Soon after I had to grade at Empower which was where I first met Master Ron. I was 12 years old and remember the first time we sparred together… I didn’t land a single hit and when Master Ron swept me onto the floor I remember feeling totally inspired. I have learned so much in the last 6 years from him.

In 2015 I was lucky enough to be trained by Master Barry Andersen – 6th Dan (studied Karate and Aikido). He was a great inspiration to me, in particular being 2 times sparring champion in his home country of South Africa. He taught me many new things that I incorporate into my style and try and pass onto my students.

I consider my 2nd Dan grading one of the biggest achievements of my life. I prepared so hard and on the day it was both mentally and physically super tough – but the support I had from friends and family was awesome.

In 2018 I took on my own club in Wahroonga and love teaching my students what I have learned. I get an immense amount out of seeing them learn and progress and I hope I can be the inspiration for them that Masters Ron, Barry and Simon have been for me.