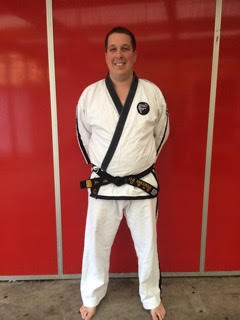 Biography
I started training in 1993 (at the age of 8) for a few reasons: my brother and I fought a lot and our parents felt that martial arts would instil some discipline and respect for each other (it has, we are both active members of the IMT and good mates); I was bullied at school, both physically and verbally, and martial arts gave me the confidence to stand up for myself and deal with the situation in an assertive, rather than aggressive, manner; and of course at the time I was a massive fan of the Teenage Mutant Ninja Turtles and wanted to emulate my heroes.

My first club was the Sydney Academy of Tae Kwon Do and my instructor was David Nowland. We initially learnt a style of Tae Kwon Do similar to IMT with ITF patterns. I took a break to go to boarding school for yr 11 and 12 and then a gap year before returning as an instructor. As I grew up I felt a profound sense of belonging in the dojang and connection with my instructor, who became my mentor. Not being very sporty, Tae Kwon Do was something I could get a sense of achievement and mastery in because I was constantly in competition with myself.

I joined the IMT in 2007. My personal situation had changed which led to difficulties training with the SAT. I had started my Education degree at Macquarie University and so was able to train with the Macquarie IMT club between tutorials. As I was welcomed into the club and became more active in it, I decided to open a dojang in North Sydney with the support of Master Ron. I took the dojang from its foundation in 2007 to the end of 2008 whereupon I handed it over to Instructor Ken Abbott as I headed overseas for work in 2009. On my return I became a Director of the IMT when an opening became available in 2010. I went on to open another dojang, this time at Cherrybrook technology High School where I work as a History Teacher. This dojang has gone from strength to strength, with numbers usually between 60 and 80 students a year, primary and secondary school age. I also taught Tae Kwon Do as an intra-school sport for two years and then a Girls’ Self-Defence course.

I have always found the IMT a very welcoming club, reflective of the personalities of its members. The key element is that the directors are always reviewing and evaluating the club’s practices which leads to an improved curriculum and systems. The Modern aspect of the IMT also means that techniques and lessons from different martial styles are incorporated to improve the effectiveness of our practice.

Tae Kwon Do is my primary style, though I’ve trained and taught ITF, WTF and IMT Tae Kwon Do. My exposure to other styles has generally been through seminars and workshops put on by the IMT. I am particularly interested in stick-fighting and have self-taught Joong Bong and Ssang Bong which are Korean styles. I am also enrolled in a Instructor Bridging Program for Kummooyeh, a Korean sword martial art.

Martial arts has made me a more assertive person. It has done this by raising my self-esteem and self-efficacy and by increasing my confidence in interacting with others. Due to the demands of training and competition I have developed a high level of resilience which allows my to bounce back from adversity.

Tae Kwon Do is such a fundamental part of my life experience that it influences every interaction an decision I make. I live by the tenets of Tae Kwon Do and encourage others to do so

While I’ve rarely had cause to defend myself or others physically, I have used the lessons of Tae Kwon Do many times in avoiding, diffusing and redirecting conflict situations both physical and verbal.

My experience in martial arts has also led to my career as an educator – Tae Kwon Do was my first exposure to instructing/teaching and to responsibility over younger students. I believe the skills and experiences I had as an assistant instructor led to my decision to become a school teacher.

Tae Kwon Do is such a fundamental part of my experience and psyche that even if I was not actively training or teaching, I would still be using and improving elements of my martial arts practice every day. My focus is not the next competition or the next grade but rather cultivating young men and women (as well as myself) into strong, resilient human beings with enough self-efficacy to be a positive influence on the world. Martial Arts is so much more than learning to fight or to defend, it’s so much more than fitness. There is a very personal spiritual aspect which sets it apart from other physical endeavours and that is something I seek to cultivate within myself and my students.